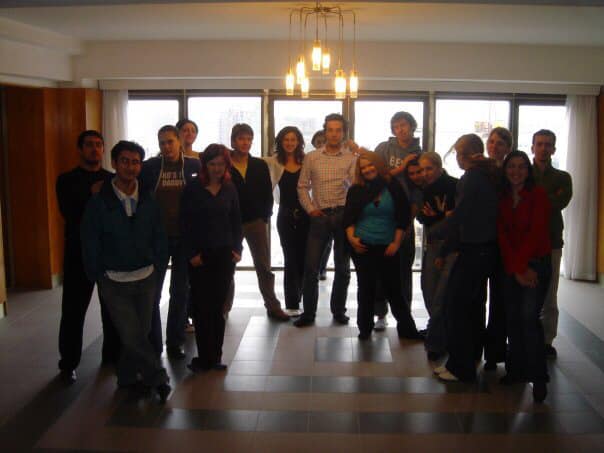 Arrival
My journey to Azerbaijan began in Stockholm, Sweden, a world away from my Central Asian destination. With a transit in Moscow, I felt myself leaving the familiar haven of Europe and on boarding the flight to Baku the realisation of where I was going finally set in. At Baku International Airport, two Azeris from the local youth organisation came to pick us up. My first experience in Azerbaijan was driving in a Lada at 150km an hour on a fog-covered road at 5 am in the morning is one experience never to be forgotten.

Baku was the destination for our Active Civil Training programme run by two partner organisations: the Azerbaijan EU Youth Co-operation Organisation (AEUYCO) and Citizens of Europe. Our group consisted of 21 participants in total coming from Ukraine, Georgia, Azerbaijan, Estonia, Norway, Sweden, Germany and Canada. All young, active and highly motivated people, this varied group would inevitably achieve some exciting results both culturally and intellectually. We had two trainers named Frank and David from Germany and Czech Republic. They would lead us through the lectures, seminars and final presentations, as well as keeping track of who had gotten up in the morning.

The location of this conference was an extremely interesting one for many. As only a couple of the participants themselves had had the chance discover the city of Baku, this was high on the agenda for most, and it was certainly a hard task to keep our concentration sometimes.

The Seminar
Our first task was to complete a memory game to learn people’s names. It worked well and the exercise was very rewarding as it left a lasting impression for the following seminar. The group was very comfortable to be in and the trainers succeeded in creating a nice atmosphere that lasted throughout the week.

The walls of the room we were to use for the week were then filled with name games, desires and fears, and details of the group’s joint organisation and contacts. We were certainly at home there. The subsequent mornings were taken up by much needed energizers followed by lectures from the trainers. These consisted of introductions to project cycle management and active civil society in Europe .

The Card Game
Then came a very interesting experience. Through the guise of a card game, we were introduced to a covert exercise in cultural integration and acceptance. We were split into five groups, each with a lead card dealer. There were also a number of observers who could move freely through the room observing the teams. Each group were given instructions on how to play the game, yet the rules were such that no one was allowed to speak. From then on the room transformed into a haze of gesticulations, exclamations, sighing and laughter. One person from each group had to swap teams, occurring twice and continue to play with the new team. Afterwards, when we had played many rounds of the game, we were all invited to stop and discuss the experience. This was when it got really interesting! There were so many opposing views, each with a concrete theory of how this game should have turned out, been played, had certain rules and what the point of it really was. To see so many interpretations and impressions come forward was truly eye opening. For me, it was more about learning to integrate a person from another culture or society and seeing how easy it is to manipulate them when you are part of a strong team. To have this played out in front of you is a very strange experience, and not altogether comfortable for some.

City Tour Game
We were then split up into four teams for the rest of the week; red, blue, green and pink. Each team was to come up with a project involving the 16-point project cycle management skills we had been through in the lectures.

To become more integrated into our groups and to see more of Baku , we were sent on a city tour game. We had maps, tasks and one Azeri to guide us in times of need. There was also a time frame and promised prize, which led some teams to become slightly competitive, although ours was more concerned with finding the right buildings and getting home for dinner! Our excellent tour guide from Azerbaijan managed to get us lost for almost an hour when we realised we had already walked past and photographed the very place we wanted to find in the beginning. My tip to avoid these situations; trust the Estonian with map reading skills and not always the locals.

Qobustan
Our bus had arrived, small, cramped, yet stylishly adapted with two front mirrors, fold down centre aisle seats and a broken windscreen. We travelled along the outskirts of the city towards the caves of Qobustan 60 kilometres from Baku. The view from the bus quickly changed from the choked traffic of Baku to that of run down buildings, rubbish lined streets, blocks and blocks of old communist buildings, and of course, oil field after oil field. The Caspian Sea seemed to be a contradiction in itself. On arrival to Qobustan, an 8 th century BC historical site of caves and rock outcroppings, we were able to leave the bus and stretch our legs. We were then guided by a small Azeri with incredibly good English through the petroglyphs that lined the walls of the caves and learnt of the ancient Norwegian ancestry this area had.

Lentil Soup
Being in Azerbaijan, the expectation of good food suitable for a vegetarian was I admit, quite poor. This was certainly not to be disproved by the local Turkish restaurant that was our host for the three meals a day we were to receive during the week. I remember starting to feeling slightly queasy by day four, and chose to stick to salads and baklava with chai tea for dessert. The lentil soup had definitely had its day after a tenth portion arrived at my table. The ambiance was however not to be missed, and I have fond memories of the staff hierarchy travelling at top speed in their black, green, white and then yellow uniforms.

Presentations
Each group had, for the past five days, been working on a project outline. We were the red group and wrote a plan for an environmental exhibition that would be piloted in Estonia. Our group consisted of Leonie from Germany, Vusal from Azerbaijan, Tamuna from Georgia, Nele from Estonia, Philippe from Canada and myself from Sweden. Initially we had problems picking a topic as we had such varied backgrounds both academically and socially. The group only really began to integrate and work well after the second or third day when we finally became accustomed to both each other and the main goal of finishing the project.

The experience of sitting down with five people whom I did not know beforehand and planning such a project was both stimulating and demanding. There were always people to placate, involve or motivate, and when all of these became too tiresome, a nap on the sofa was definitely a good option. Despite these inevitable struggles, we managed to finish in good time and in relatively high spirits with a rather fine project to present.

Sad Goodbyes
Our final afternoon in Baku was spent in the city. Picking out souvenirs and having our last look in the carpet shops which line the streets of the Old Town. On entering one, I spotted an open pad with English practice writing, which turned out to be the owner’s own work. He was learning English it was discovered and much was made of this triumph through light-hearted conversation and bargaining about how much my face would cost on a carpet. 1500 US dollars apparently, far less than the 2500 which the President of Azerbaijan amassed! However, this banter led us to be invited to see the view high up on the roof of the shop. And what a view! It was with great dismay that our group discovered there was no camera among us to capture this moment, until our friendly shop owner produced his own and promised to have them developed for us within the hour. Also, there would be chai tea waiting on our return.

So, the next hour was spent in the shop drinking chai, having a virtual tour of Azerbaijan and its history pointed out by a red laser on a beautiful carpet adorning the wall. To top it off, we were shown the shop’s photo album of the rich and famous that had passed through, and low and behold, there was Jean Claude van Damme in all his glory, he had of course been in Baku the week before! To my great pleasure, the last photograph now in the album was of our small group looking rather pleased with themselves.

Journey to the Airport
We began our journey home at 3 am in the morning on the familiar road to the airport. Our own Mercedes Benz travelling at a rather subdued speed overtook a small red taxi. This was not to be tolerated however by the Lada’s taxi driver, and turned into a real-life version of the film Cars. Overtaking has never been so much fun, or frightening. So our trip to Baku had ended. With such an interesting and stimulating week, it would now be extremely difficult to adapt back to the somewhat lacklustre life I lead in Sweden.

This Report was written by Anne Wik from Stockholm, Sweden.

Previous Post
European Citizens’ Initiative
Next Post
Who are the Citizens of Europe?
Menu
We use cookies on our website to give you the most relevant experience by remembering your preferences and repeat visits. By clicking “Accept All”, you consent to the use of ALL the cookies. However, you may visit "Cookie Settings" to provide a controlled consent.
Cookie SettingsAccept All
Manage consent