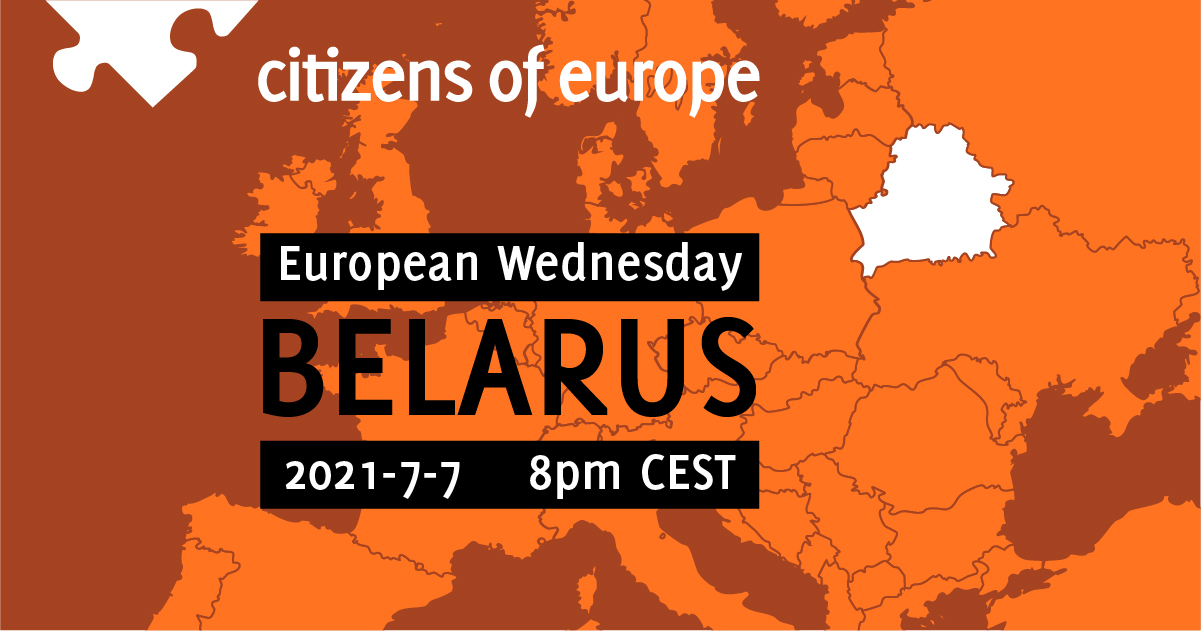 European Wednesday – that is when a Maltese pensioner, a Polish PhD student and mother, a French logistics manager, a Finnish scientist and a British former MEP talk with many others about something of common concern. In a video conference and with contributions by interesting experts. The first event in this format was held by Citizens of Europe e.V. on 7 July, on the topic of Belarus.

At the beginning, “Pavel”, a democracy activist, reported live about the situation in Minsk. He said that after the rigged elections, everyone thought Lukashenka’s days were numbered. He had lost any connection to his people, as shown, for example, by his belief that no one would take the wife of his fearful opponent Tychanovski seriously anyway. The people, however, had wanted the change. And the prospect of a female leader had not unsettled them in the least, rather the opposite. Today, more than two-thirds of Belarusians were clearly on the side of the opposition in his opinion – while Lukashenka is muddling through.

Pavel Slunkin, former diplomat and Guest Fellow at the European Council for Foreign Relations, described the situation of the regime in Belarus as fragile: Until now, Lukashenka had sought cooperation with the EU in order to secure a certain independence vis-à-vis Putin. Now he found himself in a precarious dilemma: his power depends on Moscow’s support, but at the same time he must not allow Belarus to be drawn completely into the Russian orbit. Otherwise, the country’s survival would be in danger – just as his personal survival, not only in the political sense.

Michael Gahler MEP, Member of the Foreign Affairs Committee of the European Parliament, saw also the Kremlin in a difficult situation. The fear of democratic movements was great, and at the same time the “engagement” of the Russian state in Ukraine, Georgia, Moldova, the Middle East and now also in Belarus was putting an unsustainable strain on Russia’s budget. “I don’t have a crystal ball, but I can’t imagine that this will go well for another five years,” Gahler said. “Russians also want functioning public infrastructure, schools and a health system.”

The discussion, moderated by Frank Burgdörfer, then revolved around the question of the relationship between values and geopolitics: Doesn’t the EU behave just as expansively as Russia when it wants to spread its own values? Gahler’s answer: “We as the EU do not impose a government on anyone and do not demand that anyone adopts our democracy. But those who position themselves alongside us must be able to count on us.” Not everyone shared this enthusiasm for an active role of the European Union. However, there was agreement that dealing with challenges like Belarus was crucial for the credibility and self-image of the European Union.

Citizens of Europe will continue the format on other European issues. The next European Wednesday will take place on 1 September.

YOU can have a say on the topic of the next European Wednesday, participate in our digital survey!

Previous Post
Online event: Valorization of European Digital Heritage for Social Inclusion (09. & 10. June)
Next Post
European Wednesday: United Kingdom
Menu
We use cookies on our website to give you the most relevant experience by remembering your preferences and repeat visits. By clicking “Accept All”, you consent to the use of ALL the cookies. However, you may visit "Cookie Settings" to provide a controlled consent.
Cookie SettingsAccept All
Manage consent