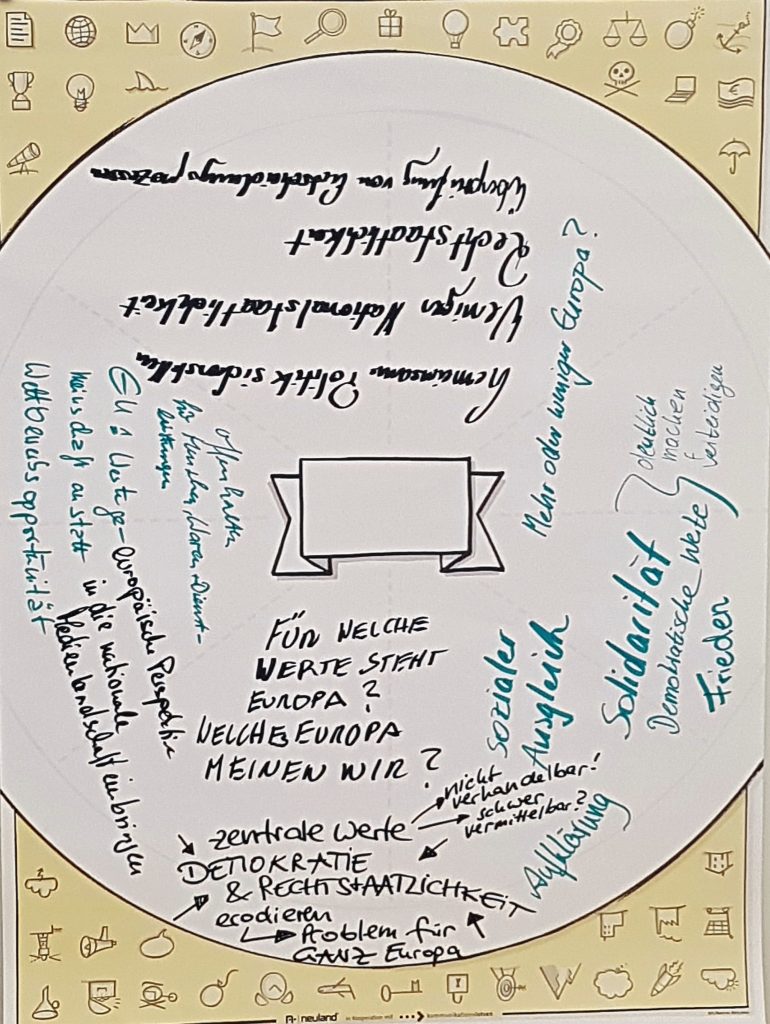 On July 5th, the EBD (European Movement Germany) organized together with the Federal Foreign Office a Stakeholder-Forum in Berlin. Citizens of Europe took actively part together with representatives from 244 other member organisations to hold a dialogue about European Politics.

Michael Roth, MdB, secretary of state for Europe, greeted the participants. He appreciates the work of the EBD and explained on behalf of the German federal government why those kinds of civic dialogues are important to implement and hence specified in the coalition agreement. He states that times, in which people took courses at the adult education centres in order to understand European politics are over. European communication requires a much deeper dialogue that occurs on equal basis.

Dr. Linn Selle, the newly elected president of the EBD took up Roth’s speech and endorsed the German federal government’s initiative to follow Macron’s call by holding civic dialogues. However, she expressed her concern that those dialogues need to involve the citizens more actively, they need to see their impact to engage them further in European issues. Through the government’s initiative, the EBD sees the opportunity to hold more constructive dialogues with citizens via its various members. The EBD recently published a list of criteria to enable a successful and targeted basis for civic dialogues in this context. Principles, such as the choice of topics on equal bases, the need for a regional balance as well as the importance of feedback of the dialogue’s results, are important to take into consideration.

The discussions took place in the format of a World Café, meaning an active participation at thematic tables. By means of a regular rotation, participants changed the tables to discuss different topics and to gain diverse inputs.

The themes represented the diversity of the organisation itself – there were debates about European youth and education policy, economic unity and social convergence, sustainability and environmental policy as well as democracy and civic engagement.

Citizens of Europe moderated the table regarding the topic of European values and borders. Our topic, strengthening European values and voices as well as overcoming boundaries, has been discussed for a very long time and always comes up. Nevertheless, it becomes a new perspective, if different views from different people come together.

What can be understood under European values? Our results can be divided into two groups. On the one hand, there are individual rights the Union provides its citizens with. Examples would be civil liberties as well as property rights in front of the government, such as freedom of religion, of speech or of occupation. All those rights, with the origin in the enlightenment and in the Judaeo-Christian tradition of Europe are included in the EU Charter of Fundamental Rights.

The participants identified on the other hand a second group, namely the one of “European virtues” or “guidelines for being European”. This matches principles such as the rejection of nationalism, reliability and solidarity – all together with the basis of mutual respect. Our loyalty to European virtues and to Fundamental Rights does not only provide Europe a voice, it represents Europe’s standing in the world and represents its attraction.

The worse, that a paradox has been developed. Europe, transmitting those strong virtues and rights on the outside, is currently shaped by doubtful and desperate minds on the inside. European values are often questioned and attacked during the last months, which is also caused by the countries’ different interpretations of those rights. This interpretation issue is often used as a justification for breached solidarity and reliability. People initially thought, that judiciary is responsible for those fundamental rights and politics accordingly for “European virtues”. However, after constructive discussions, it became obvious that the two categories are going hand in hand.

What solutions and approaches can be searched for to re-strengthen the values? Something that was mentioned by many participants was the punishment through sanctions, but only shortly afterwards, this argument was revised and they agreed upon the fact that neither sanctions nor rewards would result in a common conviction. Instead of compulsion and subjection, there is a need for more communication and a convinced and convincing presentation of European values. What provides European values outside Europe a voice? In the context of overcoming boundaries, participants reported from different experiences. It became obvious that the blue star-spangled flag plays a crucial role abroad – either as a counterexample to Trump’s power games or as a symbol against corruption and authoritarianism in Kiew or Skopje.

Therefore, we can conclude that Europe represents a strong and solidary Union as long as it respects and relies on its values. To meet the expectations on the outside, it is time to foster this credibility in the inside again by mobilizing the silent majority – this forum was one step in the right direction.

Forums like this are not only important – they are necessary. It’s a place, where something happens and changes occur. People from different backgrounds come together and talk about the EU in a respectful manner. Everyone contributes his or her own and often completely different perspective, which creates something entirely new and valuable at the end. It was an honour to be part of this initiative and we are looking forward to future forums.